NORWALK, Connecticut, October 17, 2018 — Twenty-two year old Sawyer Gaines suddenly couldn’t move his right arm. He was light headed, and felt like he was drifting away. He knew something was wrong, but he didn’t know what was happening. He was scared and alone in his family’s house in Weston, Connecticut. Sawyer would later learn that he had endured a severe ischemic stroke. His mom, Tina Gaines, and a neurosurgeon from Western Connecticut Health Network (WCHN), Joshua Marcus, MD, saved his life.

Mom to the Rescue!
Sawyer was in the kitchen when he first started to experience signs of stroke. He had to manually move his right leg so he could walk to the couch in the living room and lay down. That’s where his mom found him when she came home a couple of hours later.

“I had drifted off to sleep on the couch. My mom sensed something was wrong so she nudged me awake. I realized I couldn’t speak when I tried to tell her that I couldn’t feel the right side of my body,” said Sawyer. “My mom is stroke aware because her dad, my grandpa, had a stroke. She asked me to smile and saw that the right side of my face was drooping. She suspected I was having a stroke and called 9-1-1.” 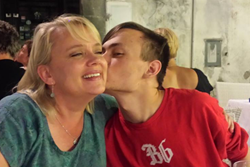 Norwalk Hospital Stroke Team on the Case
Norwalk Emergency Medical Services (EMS) transported Sawyer to Norwalk Hospital, where a rapid response stroke team was ready for his arrival. A computed tomography (CT) scan revealed a blood clot in his brain. He immediately went into surgery with Dr. Marcus.

On October 17, 2017, Dr. Marcus performed a mechanical thrombectomy, a highly advanced minimally invasive endovascular procedure to treat stroke. He successfully removed the blood clot from a blood vessel in Sawyer’s brain. Danbury Hospital and Norwalk Hospital, both part of WCHN, are currently the only hospitals in western Connecticut that offer mechanical thrombectomy to treat stroke.

Mechanical Thrombectomy Increases the Window for Stroke Treatment
Stroke, the fifth leading cause of death in the United States, is a broad term that describes damage to the brain. There are two types of stroke: hemorrhagic stroke which results from bleeding inside the brain, and ischemic stroke which occurs when a blood clot blocks the oxygen-rich blood supply to the brain. Ischemic stroke, the type of stroke Sawyer experienced, occurs in about 87 percent of stroke cases. Signs of this type of severe stroke are the inability to move and speak.

The mechanical thrombectomy procedure increases the window to effectively treat stroke from four and a half hours to 24 hours in select cases. This means there is more time to treat stroke and improve the patient’s outcome.

During a mechanical thrombectomy, a neurosurgeon uses x-ray guidance to lead a catheter through an artery in the groin, up the aorta, and into the brain to remove the clot. The mechanical thrombectomy has been FDA approved for people experiencing acute ischemic stroke, or those with a large vessel that is blocked.

“It is critical for someone having a stroke to seek care quickly in order to restore blood supply to the brain and reduce the risk of long-term disability. While we still encourage anyone experiencing signs of stroke to call 9-1-1 immediately, the mechanical thrombectomy gives our patients more time to be effectively treated if they don’t identify stroke and seek care right away,” said Dr. Marcus.

The mechanical thrombectomy was a lifesaving option for Sawyer because he arrived at Norwalk Hospital about five hours from the onset of stroke symptoms.

“The mechanical thrombectomy is a real game changer. Without the mechanical thrombectomy, Sawyer most likely would have endured permanent damage,” said Dr. Marcus. “We are now seeing patients like Sawyer, with the inability to speak or use one side of their body, go home and get back their normal self. It’s so great to see our patients maintain their independence and quality of life.”

Sawyer’s Recovery
Sawyer recovered from his surgery in the Norwalk Hospital Intensive Care Unit (ICU) and continued his recovery in the inpatient rehabilitation unit. He needed to learn how to speak, use the right side of his body, and walk again. He started with taking baby steps down the hall to learn how to walk. To learn how to move his right arm, he picked up a ball, moved it, and then put it down.

“I tried not to think about how simple these exercises were, compared to being able to do anything before. I accepted my situation and put things in perspective. My reality was that there were two options: take these baby steps and recover, or don’t. I chose to focus 100 percent on my recovery,” said Sawyer.

Through physical therapy at Norwalk Hospital, Sawyer learned to speak and walk again. Now, one year later, he is back to his normal self.

“I’m thankful to Dr. Marcus, the stroke team, and the nurses and physical therapists that took care of me at Norwalk Hospital. I’m also thankful to my family and friends, without whom my recovery would have been much harder. To say that they were amazing is a massive understatement — my immediate family are my guardian angels, and my extended family and friends were so supportive,” said Sawyer.

Stroke: Know the Facts
While stroke is more commonly associated with an older age group, it can happen to anyone, at any age. In fact, recent studies have shown a rise in stroke in younger age groups. This may be related to lifestyle, including lack of a healthy diet and regular exercise, and long-term use of birth control pills.

Sawyer most likely had a stroke due to a congenital hole in his heart that he was unaware of before the stroke. He recently had the hole in his heart repaired. The now 23-year old wants to share his story so others know what to do if they are experiencing a stroke.

“I was 22 years old. My mind just didn’t go there — that I could be having a stroke —because of my age. I hope that by sharing my experience, I can help others to recognize the signs of stroke and seek care quickly,” said Sawyer. “It’s also important to understand what stroke care is available to you in your community. I’m fortunate that the closest hospital to my home, Norwalk Hospital, offers the mechanical thrombectomy, has a dedicated stroke team, and wonderful nurses and physical therapists,” he said.

Consider FAST to remember the main signs of stroke:

F: Facial weakness, asymmetry (drooping face, crooked smile)
A: Arm weakness (numbness, unable to lift one or both arms)
S: Speech is impaired
T: Treat — seek treatment immediately!
If you are experiencing signs of stroke, call 9-1-1 immediately. Emergency service personnel are trained to recognize the signs of stroke, and will take you to the right hospital to treat your stroke. For instance, Danbury Hospital and Norwalk Hospital each have a rapid response team that is alerted and ready to treat the stroke patient upon arrival at the hospital.

About Dr. Joshua Marcus
Dr. Joshua Marcus is a neurosurgeon who focuses on the minimally invasive treatment of brain and spine conditions, including tumors, degenerate and traumatic spine disease, trigeminal neuralgia, and other chronic pain syndromes. He is one of only a few physicians in Connecticut with advanced training and dual expertise in both the open surgical and minimally invasive treatment of cerebrovascular conditions including cerebral aneurysms, arteriovenous malformations, carotid artery disease, as well as hemorrhagic and ischemic stroke. Dr. Marcus practices out of Danbury Hospital, Norwalk Hospital, and Neurosurgical Associates of Southwestern Connecticut. Hear more from Dr. Marcus in this video.

About Stroke Care at WCHN
In November 2016, Dr. Marcus and the endovascular stroke team at WCHN set a new standard in stroke care for Fairfield County by performing the first mechanical thrombectomy to treat stroke. Since then, Dr. Marcus and WCHN’s endovascular stroke team have helped many patients reduce the risk of long term disability from stroke with this lifesaving procedure.

Danbury Hospital and Norwalk Hospital have been certified by The Joint Commission as Primary Stroke Centers since 2006.