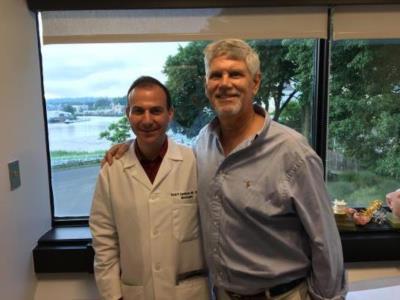 NORWALK, Connecticut, October 23, 2019 — John Kaczmarczyk’s wife, Noelle, and their son, Dylan, were at home when they heard a thud. They went to investigate the sound and found the alarming cause. John, 58, was unconscious on the floor at the bottom of a flight of stairs with shattered glass around him.

Noelle and Dylan quickly assessed the situation. They suspected John fell backwards while walking up the stairs to take out the recycling. He was breathing and they didn’t see blood at first. Noelle stayed with John and Dylan went to call 911.

Everything that happened next felt like rapid fire to Noelle. Emergency medical services quickly arrived at their home and transported John to the Norwalk Hospital Bauer Emergency Care Center, where the trauma team examined him immediately.

The trauma team suspected John had a serious neurological injury and would need surgery. John was still unconscious, his head was indented and bleeding, and most concerning, he had a blown pupil, which indicated that his brain was being squished and death was imminent.

The CT results showed that John had a severe traumatic brain injury (TBI). John had a skull fracture and a subdural hematoma, which is a collection of blood between the layers of the protective covering of the brain. Subdural hematomas compress the brain and can lead to death if the blood is not drained.

Dr. Scott Sanderson, Neurosurgeon
(click to view profile)
Blood was on the right side of John’s brain and also on top of his brain. This unusual pattern of blood was cause for concern because it increased the risk of complications during surgery. Also cause for concern was the skull fracture because it had torn the superior sagittal sinus, which is a major vein in the brain.

“The blood in the brain was exerting pressure on the torn vein and keeping it from bleeding. Our major concern was that the vein would bleed uncontrollably when we removed the skull and the blood,” explained Dr. Sanderson.

When the surgical team was prepping John for surgery, Dr. Sanderson met with Noelle outside of the OR.

“I went to see Noelle before operating on John to explain the surgery to her. She was understandably very upset, which was tough to see because I wanted to be there for her, but needed to get to John in the OR,” said Dr. Sanderson. “When our patients need emergency surgery, we know their loved ones have many questions and we wish we had time to answer them all. We need to quickly and clearly explain the situation, what we’re going to do, and assure them that we have an extremely skilled team in place that’s ready to get to work.”

“Everything was happening so fast. All of a sudden I was meeting Dr. Sanderson outside of the OR. He was to the point, but still so kind. He even let me see John before he went into surgery.”

John and Noelle have a strong faith, so it was very comforting to Noelle when Dr. Sanderson let her pray over John and kiss him before he went into surgery.

“That meant the world to me,” said Noelle.

During the three-hour surgery, Dr. Sanderson and the surgical team first removed a portion of John’s skull so they could then remove the blood. The surgery went well without any complications.

“In emergency surgery situations, our training kicks in when it’s go time. We start with plan A for the best case scenario, and we have a plan B, C, and so on for different scenarios we may encounter,” said Dr. Sanderson, who sees these types of TBIs often, and has had extensive training treating complex neurological conditions. Dr. Sanderson is also an assistant clinical professor of neurosurgery at New York University Medical Center.

Despite being the middle of the night, John’s family rallied at Norwalk Hospital for him. Noelle and her brother, who is a pastor, stayed in the chapel the entire time during John’s surgery. John and Noelle’s kids who live in Connecticut were there, and John’s ex-wife brought food for everyone. Between the two of them, John and Noelle have seven kids. The next day, their kids who live in Arizona, Florida, New York, and Washington, DC traveled to Norwalk Hospital to be there for John too.

“The support was amazing,” said Noelle. 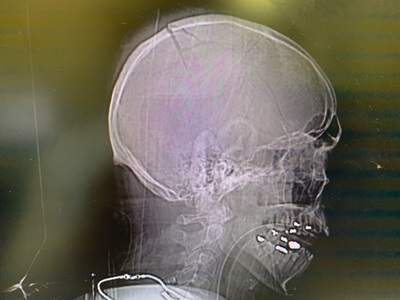 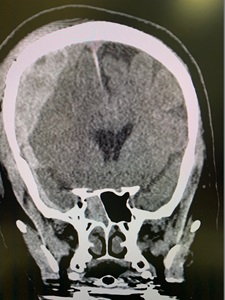 John was in the Norwalk Hospital Intensive Care Unit (ICU) for three weeks after surgery. He was unconscious most of the time, and when he was awake, he wasn’t lucid. John had altered mental status, which is common after enduring a severe TBI. The TBI also caused speech problems, and muscle weakness and limited mobility, especially on his left side.

Noelle stayed by John’s side the entire time he was in the ICU. She wanted to be involved with his care. John’s care team said she could move John’s arms and legs to work his muscles, which she did religiously.

In addition to Dr. Sanderson, the neurosurgery team included Dr. Ramon Batson, section chief of neurosurgery at Norwalk Hospital, and Katie Swan, neurosurgical PA, who all practice out of Neurosurgical Association of Southwestern Connecticut and perform surgeries at Nuvance Health’s Danbury Hospital and Norwalk Hospital. Tiffany Urban, a nurse and patient care manager of the critical care units at Norwalk Hospital, was especially comforting to Noelle and her kids. Tiffany gave them journals to write in to help keep their minds busy while they stayed with John.

Despite John’s condition, Noelle kept talking to him. She would say over and over, “I love you, I love you.” Then one day, John garbled back, “I love you too.” Noelle was so excited, she ran out to the nurses station to tell them.

“When John first started talking, he didn’t sound like himself, and he wasn’t aware of where he was or what had happened. But then he started saying things that were like him, and his wonderful features came back — that was such a relief,” said Noelle.

After John was discharged from Norwalk Hospital, he went to an inpatient rehabilitation (rehab) facility that specializes in helping people recover from severe TBIs. His cognition and speech improved within the first month. He worked hard to relearn how to walk and regain strength in his upper body.

After three months, John walked out of inpatient rehab. He made great strides in rehab and just needed to use a cane for assistance walking. He continued on to outpatient rehab, where he started to be able to lift his arms.

The inpatient rehab staff trained John and Noelle. When they went home, they stuck to a similar routine that John followed as a patient. Every day, Noelle got John up at 5:00 AM and they went through the physical therapy exercises in their home gym.

Today, John is walking 1.25 miles around his block, without a cane. He rides a stationary bike and is on his way to meeting his goal of 30 continuous minutes. He plays fetch with his 13-year old yellow lab, Emma, who thinks she’s still a puppy. His cognitive skills are continually improving, and his balance and sense of touch are too.

“I’ve always been stubborn, which is great now because I’m not going to stop working at my recovery,” said John.

“Doctors, nurses, and therapists can start rolling the ball to recovery down the hill. But it doesn’t keep going if the patient doesn’t pick it up. And that’s exactly what John did, along with his entire support system,” said Dr. Sanderson. “John had a remarkable recovery from a life-threatening head injury because he put in the work, and his care teams and Noelle were with him every step of the way. John will continue to get better as long as he keeps putting in the work.”

John was especially excited when he achieved three milestones. He was able to visit his daughter in Arizona for the first time since the injury.

He cooked his first meal for his family since the injury. This included shopping for ingredients, putting the groceries away, cooking and setting the table, and then enjoying the grilled lobster, corn, potatoes, and salad he prepared. This was a big deal for John because he owned a catering business for many years before he retired.

In September, John and Noelle reinstated their annual anniversary trip to Block Island, which is where they got married 15 years ago.

How John fell down the stairs is still a mystery because he doesn’t remember falling. John and Noelle said serendipitous circumstances contributed to John having a positive outcome after enduring this catastrophic injury.

The day and time John fell, he normally would have been home alone. It was a Wednesday evening, which is when Noelle babysits her grandchildren. She had broken her toe so she decided to stay home and rest. It was also unusual for Dylan to be home at that time.

John is a member of the Weston Volunteer Fire Department, so his colleagues from local emergency medical services — ambulance, fire, and police — who are familiar with his home were on the scene within minutes of Dylan calling 911. The police even drove Noelle to Norwalk Hospital so she could also get there safely and quickly.

Through John and Noelle’s faith, they believe people are put into their lives for specific reasons. However much they didn’t want this to happen to John, they are just as grateful for the people that helped John keep his life.

“Dr. Sanderson is a rock star. He not only saved John’s life because he’s a skilled neurosurgeon, but he really cared about John and me,” said Noelle. “During John’s recovery at Norwalk Hospital, the care for him was over the top. The doctors and PAs checked on him every day and the nurses were phenomenal.”

“When you’re lying in a hospital bed, it’s a pretty lonely place. I was blessed and fortunate for my support system, and the medical staff at Norwalk Hospital rocks,” said John.

John continued, “Dr. Sanderson’s knowledge and expertise saved my life. Noelle’s faith and love helped me get my life back. Noelle is my true hero and my Earth angel.”

John and Noelle would like to thank all of their children who stood by them — Dylan, Jack, Emily, Nikki, Amber, Corey, and Rickey — and also extend a special thanks John’s ex-wife, Marianne, and to Mark Blake from the Weston Volunteer Fire Department.

To learn more about neurosurgery at Norwalk Hospital, visit our website.