NORWALK — When the patient arrived at Norwalk Hospital in November, she couldn’t use the right side of her body or speak.

Within hours, a team of doctors and nurses were able to completely restore these abilities for the woman in her mid-50s, thanks to a new stroke treatment offered at the hospital. 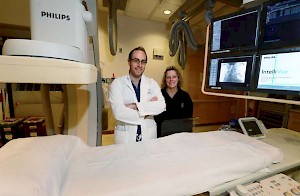 It was the first time neurosurgeon Dr. Joshua Marcus and the Endovascular Stroke Team at Norwalk Hospital successfully performed the endovascular stroke procedure, which allows doctors to physically remove blood clots in the brain that could cause severe and irreversible damage.

“The procedure went very well and we were able to restore everything,” Marcus said. “You have a limited window to treat a stroke before serious damage is done to the brain, so to offer this procedure is a huge benefit to the community.”

Ischemic strokes, caused by a blood clot in the brain, make up about 87 percent of all stroke cases. Traditionally, they have been treated with an intravenous medication that breaks up the blood clots. Marcus said this therapy works well for small clots, but is less effective with larger blockages.

The intra-arterial method, which involves accessing the brain through an artery in the groin, allows doctors to physically remove larger clots with a much better success rate than the medication. Marcus, who joined the Western Connecticut Health Network in August, said the procedure is quickly becoming the gold standard in ischemic stroke treatment due to its safety, efficacy and expanded treatment window.

Additionally, Marcus said the medication must be administered within four hours of a stroke in order to be effective. The new therapy extends the treatment time for strokes up to eight hours, and because patients no longer have to be transferred out of Norwalk Hospital to receive the treatment, it has already saved lives in Norwalk.

“When someone is having a stroke, it’s critical for the patient to receive treatment quickly to save their life and reduce the risk of disability,” Marcus said. “If it’s not treated in time, the patient will either have a massive disability or die … time is of the essence when you’re treating a stroke. You have limited time before the brain dies.”

Stroke Coordinator and Rapid Response Nurse Michelle Lecardo is part of the team that assists with the new procedure at Norwalk Hospital. She said strokes are becoming more common in young people, and being able to provide treatment as quickly as possible can help people regain decades of their life, as well as maintain their quality of life.

“A lot of people don’t pay attention to the signs and symptoms of a stroke,” Lecardo said. “So often by the time they get here, we’ve already lost a lot of time. To be able to provide this treatment here, without sending patients to another hospital, is really revolutionary. It’s also better for the families because it keeps people in the community.”

The treatment has been added to services available at both Norwalk and Danbury hospitals. No other facility in the area offers the minimally invasive treatment in the emergency management of patients with acute strokes. Marcus estimated he and the endovascular stroke team will have to conduct the procedure about twice a month, given the prevalence of severe ischemic strokes.

“You want to be at a place that can treat everything,” Marcus said.

Marcus is the only physician in Fairfield County and one of only a few in the state with advanced training and dual expertise in both the open surgical and minimally invasive treatment of cerebrovascular conditions including brain aneurysms, arteriovenous malformations, carotid artery disease and strokes.

“We are so pleased to now have the ability to provide this cutting-edge, minimally invasive treatment. As with heart attacks where time is muscle, for strokes, time is brain,” said Anne Bartolone, director of Cardiology Clinical Operations at Norwalk Hospital.

Symptoms of a stroke include face drooping, arm weakness and difficulty speaking. Marcus and Lecardo said anyone exhibiting these symptoms should get to a hospital immediately, even if the symptoms go away. They also advised people to check the time in order to know when the first symptoms appeared.

Norwalk Hospital and Danbury Hospital offer a full range of other neuroendovascular and neurosurgical procedures on an emergency basis, including minimally invasive evacuation of intracranial hemorrhage, aneurysm coil embolization, aneurysm surgical clipping, embolization for severe nosebleeds and more. Norwalk Hospital and Danbury Hospital have been certified by the Joint Commission as Primary Stroke Centers since 2006.